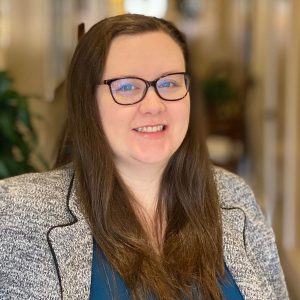 Danielle, originally, from Broken Arrow, Oklahoma, has called Arkansas home for the past 13 years. In 2009, she graduated from the University of Arkansas, Fayetteville with a Bachelor of Science Education Degree in Health Sciences in and from the William H. Bowen School of Law in 2013. She was admitted to practice law in Arkansas in September 2013.

Danielle clerked for Judge Fleming at Little Rock District Court and was an active member of the Coalition to Abolish the Death Penalty in law school. She worked as the Coalition’s Public Relations Chair her final year at Bowen.

During and after law school, Danielle worked full time at Delta Trust & Bank (now known as Simmons Bank) in the Retail and Trust Departments, and finally the Office of the General Counsel. During her banking years, Danielle honed her skills in working with the public and resolving issues quickly and effectively. Danielle’s banking, real estate, finance experience is the perfect background for her position as a Litigation Attorney in the Civil & Criminal Divisions of Leigh Law.

Danielle is a member of the Arkansas Trial Lawyers Association and is married to a Registered Nurse, living in West Little Rock with her husband and two fur-children, Stella and Franklin.

Thank you for visiting the Web site of Leigh Law. This site is for informational purposes only. None of the information is intended to, nor does, constitute legal advice or the formation of an attorney-client relationship. The information is not guaranteed to be correct, complete, or current.
You should not act or rely on any information at this Web site without seeking the advice of an attorney. Any information that you send us in an e-mail message might not be confidential or privileged, and sending us an e-mail message will not make you a client of Leigh Law.
This Web site contains links to other resources on the Internet. The links are not intended to state or imply that Leigh Law sponsors or is affiliated or associated in any way with the information at those other Web sites.